The Cruise, Rome and Tuscany

I really do need to back up a bit and write a little about our cruise experience and our stops in Italy. My lack of postings during that week are an indication of the lack of wifi and the breakneck speed at which we were visiting places. 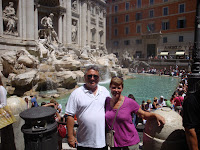 On our first night aboard we joined the group I had been conversing with on Cruise Critic. This was a great way of "pre meeting" some of the people on the cruise. I was lucky enough to strike up a conversation with Richard Lyons. I was asking Richard about his plans for Rome because I remembered reading on Cruise Critic, that like Chris and I, Richard and his group we're going to go into Rome from the port of Ciavvechia by train and seeing the sites on their own. Unlike us, Richard was very well prepared and armed with not only months of research and planning, but with his friend Derrick, who had lived in Rome for a brief time while working their. Richard very generously offered to let Chris and I tag along with them.

﻿ ﻿
Meeting Richard, his wife Margaret, Derrick and his wife Sheila has been one of the best experiences of our trip. Both these couples made us very welcome as we made ourselves part of their group. We were able to visit all of the great sites in Rome while enjoying an informative commentary by Derrick. We visited the Coliseum first, followed by the Roman forum, then the Parthenon, the Spanish steps (bought a Prada purse here), the Trevi Fountain, the Vatican, the Vatican museum and Sistine Chapel and finally the basilica. Derrick whizzed us around the streets with great confidence. He also showed us where he stayed, next to the Parthenon, while working on the movie Ocean's 12. We had a fabulous day in Rome but needless to say, we were pretty exhausted!
This did not stop Chris and I from having a few drinks that night at the disco and then listening to some karaoke. We needed a few drinks after listening to some of the singers... 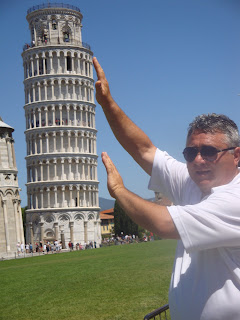 The next day was our stop at the port of Livorno from which you could visit Florence or Pisa or just take in other parts of Tuscany. Unfortunately, the trains and busses, our preferred mode of transportation, was on strike when we arrived, but fortunately our companions of the previous day had decided to get a rental and asked if we would like to join them again. Derrick drove as we made our way to a smaller place by the name of Lucca. This was a charming medieval town which was not quite as crowded as the usual touristy spots. On the way back we stopped at Pisa and had a very nice walk around. Both Chris and I were very impressed with Pisa...originally we had not planned to visit this as I thought it was a bit gimmicky but I'm really glad we did now. I managed to buy a bees suitcase for €20 and Chris picked up a "genuine" Brestling aviation watch for €15 after talking the guy down from €85.
Derrick, Sheila, Richard, and Margaret were, once again terrific company. These four long time friends are from California but Derrick and Sheila we're originally from England. Perhaps one day Chris and I will be able to take Margaret up on her offer to come and visit them!
Posted by Terry at 5:59 PM