When two people travel together there is always an adjustment period as each gets used to the others particular habits and quirks. Although Chris and I have been for week long all inclusive vacations to Cuba and on a few skiing vacations, an extended sightseeing tour like this can be stressful. We each have a bit of a different style while traveling. I like to wake up early and get going with a laid out itinerary, which I may or may not deviate from. Chris likes to wake up in a leisurely manner and if he wants to sleep in after a late night he is fine with not sticking to a schedule. In fact he really doesn't need a schedule at all. While walking around a new city I like to have a good pre knowledge of where I'm going and I like to move quickly through crowds so I will "dodge and weave" as necessary. This bothers Chris so my solution is to let him take the lead now. This seems to eradicate the problem of him running into me. I can also be impatient and once I know where I'm going then I like to get moving. I usually have a pretty good sense of direction and can read a map quite quickly. Chris doesn't really trust my instincts and wants to study the maps until he is fully confident. This can take a while since he seldom has his glasses with him and, although he has many wonderful qualities, an innate navigational system is not one of them. Both Chris and I are learning to be more patient. 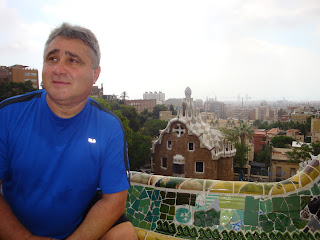 We had planned on taking the Barcelona tour bus which is a pretty good deal at €23 per person for an entire day of hop on hop off touring with commentary, but Chris opted for a lie in so I spent the morning catching up on blogs and my courses then when he woke and had breakfast we took the metro to Parc Guell. The metro is an extremely economical mode of transport in Spain. Once we got off the metro we had a short walk but then a huge uphill excursion to the top of the park. Thank goodness the powers that be realized that this uphill battle would discourage many potential visitors and so they have installed a series of wonderful outdoor escalators! The park is actually the site of an estate commissioned by a Lord Guell at the end of the nineteenth century. He enlisted the help of his good friend Gaudi and they spent several years constructing this magnificent example of this national icons work. As happens with these grand schemes,the money ran out, Guell lost everything and the project was abandoned. The Spanish government eventually took things over and the site became a national park. It really is a phenomenal site. We entered from the back but you can enter from the front where you see two guard houses which remind me of Brams fairy tales or even Lord of the Ring type dwellings. There are then grand staircases with a mosaic dragon, that lead to a columned portico in which there are numerous ornate mosaic designs. On either side there are staircases which lead to a huge plaza area encircled by an amazing bench decorated with broken tile pieces. Parc Guell really is quite spectacular.


Once we were back at the hotel after our little excursion, we took a taxi to the port to begin our cruise. The hotel clerk told us it shouldn't cost more then €10. The ride was short but there was "mucho traffic". (Apparently in Spanish if you put a o at the end of everything english you are good to go!) I kept my eye on the meter as I really don't trust taxi drivers, especially after an unfortunate iPhone incident. The met had read €11.85 but as we came to a stop the driver made some very quick hand movements and the next hinge you know the meter reads €25.85. I quickly said no it was €11.85 and that was what we would be paying. The driver began yelling and pointing at a sign about baggage costs and a port supplement, of course this was in Spanish. Chris began taking the bags out of the trunk and told me to just give him €5. Since I only had a twenty, and I did want to be fair I told the guy he was getting €14.85 - the metered fare plus three euros for three bags. He was beginning to yell, in Spanish, for the police and Chris was yelling for me to give him five and leave. Finally Chris realized I didn't have the correct change so he handed me a ten. I thrust it into the taxi cab drivers hand and ran over to help Chris with the bags. The driver ran over to a male and female police officer and pointed at us leaving. We decided to be prudent and not try to escape the justice system of Spain as this might just interfere with our well laid out travel arrangements! I think the police spoke some English because as the driver yelled about port and bag supplements, I was able to interject the fee that appeared on the meter. The police then said something rapidly to the driver. As they tush ok there heads and began an heated exchange I could tell the upstanding law enforcement of Barcelona was on our side. We knew not to push our luck so I made motions and asked if we were free to go. The officer nodded and we scooted away as quickly as possible!
Our adrenaline pumping we headed for the check in line. We have only packed the smaller traveling cases so we could avoid checking in but unfortunately the pulling handle on mine broke the previous evening so I babies that along with my backpack and Chris took his case, duffel bag and our sac of permitted booze (2 bottles of wine, 12 cokes, some water....well 3 bottles of wine....what rebels...well all that plus the two very large bottles of listerene refilled with rye! It ended up being the easiest check in ever and they really didn't seem to care at all about how much bevy you have!

The ship is massive as we expected. The Carnival Magic is the newest ship but, to me it is pretty much identical to the ship I took several years ago when I took a cruise in the Carribbean with Sasha Shelby. In fact, the cruise director, John, was actually the director of the last. Cruise as well, even though at that time he said it was his last as he was retiring. Chris and I had fabulous time at the opening show with John. This guy takes random people from the audience and through his discussions with them keeps the audience roaring with laughter. I think Chris actually had tears coming down!

Our stateroom is very luxurious with a balcony, queen sized bed, large closet, sofa and a coffee table. I feel very spoiled as a sit here in my robe typing at the desk looking out at the Mediterranean!

We went for the initial orientation where we found out that the port of Monaco was closed for the next two days due to hurricane like conditions and since the ship was already rocking badly and the skies were turning an ominous black, we were not surprised! The ships captain has decided that the best thing to do is to travel our intended route in the completely opposite manner. The is fine with as, as the only excursion we haves booked is through the cruise lines. Other travelers are not so lucky as they have booked private tours and pre bought tickets for certain attractions. Chris and I figured we would wing it with local transportation. Some people had planned to get off the ship in Sicily for good, as this was our last stop before Barcelona. Needless to say the front desk has been jammed with people trying to fix there arrangements but surprisingly, everyone seems in pretty good spirits!
Posted by Terry at 9:25 AM