Well, we have been home for over a week now and I am sufficiently recovered from Scotland to write about the experience.  I have finished all of the laundry, caught up on my very neglected courses, visited with family and friends, and cleaned the house...sometimes coming back from a vacation can be very exhausting!

Our flight to Prestwick via Ryan Air was relatively painless and stress free despite what we had heard about this carrier.  The train ride from London to Stansted was a shocking 21 Pounds each!  Luckily, our bags were not scrutinized too carefully since the check in fellow had forgotten to put the tags on the bags of the gentleman just preceding us in line, and was being lambasted by a superior.  He really didn’t pay much attention to us at all!  When we boarded the plane we were told to sit anywhere there was a free seat...never had this option on a plane before.  The very front seats, with plenty of leg room, were still available so we snatched those bad boys up and had a great little flight!
The debarkation was a breeze and very quickly, Chris had spotted my cousin Karen walking through the terminal.  Pretty good since he had never met her and was going by my description!
Coming back to Prestwick is always an enjoyable experience for me since I spent my first year of high school living with my Aunt Mary and family in this little town on the west coast of Scotland.  Every time I return, it seems exactly the same to me...neat little houses, golf courses, a main street with several chippy’s, pubs, and shops, the beach, and a smattering of churches.  Ayr is the next big city and can be reached from Prestwick by catching the bus which will take you into the High Street (main street with all of the shops).  More about this later.

Karen and Jimmy have a very nice home across from the golf course on St. Cuthbert’s.  They had added a second story to their corner house since the last time I was there.  The house is amazingly roomy with three bedrooms, two baths, an office, a TV room (with a mega size television on which Jimmy is able to play his on line games), a living room, kitchen and fabulous back garden.  It was a gorgeous afternoon when we arrived so we quickly settled ourselves on the back patio with the invalid, Jimmy, who had met with an unfortunate accident while attending an AC/DC tribute concert a few weeks previous, resulting in a broken leg. (Alcohol may have been involved).
Now before I continue with this little narrative, I need to elucidate on the extraordinary drinking capabilities of the Scottish race.  In my opinion, there is no other nationality which exhibits the phenomenal capacity to imbibe of spirits than the Scots.  Not only do they seem to be able to consume copious amounts for extended periods of time, they do so while singing, dancing, telling stories and remaining in jovial spirits!

Each time I have visited the land of heather and haggis, I seem to spend the first forty eight hours or so drinking, singing karaoke, and dancing...it really is very hard work!  This visit proved to be no exception.  We arrived at about two in the afternoon and began with a few beers in the back garden while Chris got to know Jimmy and I caught up on all of the gossip with Karen. The plan apparently was to go for dinner and then hit a few pubs.  I tried to slow down on the beers in preparation for the evening ahead.  The restaurant we went to served fantastic food and you were permitted to bring your own alcohol!  We arrived with a bottle of red wine, several beers, some gin and some Amaretto for afters.

After dinner we headed across the street to the Red Lion and then off to another establishment which was featuring a live band and was jammed with patrons.  It was here where things start to become a bit fuzzy for your esteemed narrator...I recall being handed a glass full of some amber fluid and Karen yelling in my ear that the bartender made some sort of mistake and so I was to be the proud recipient of the error.  Apparently, we ran into Johnny, Karen’s brother, at about this time and the whole party moved up the road to a place known as “The Centre”, this being Johnny’s regular drinking establishment.  The evening continued with some karaoke, more drinking of shots, and some lively conversation....we headed home in the wee hours and checked out some of the pictures from our trip... 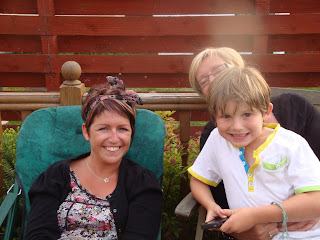 The next day we had a bit of a lie in and then geared up for a barbeque in the back garden with the rest of the family and friends.  The weather continued to be uncharacteristically hot; so much so that we had to seek out some shade.  Another terrific meal and great company!


On Sunday, we headed out to Jam at the Dam at about 2pm, a day long concert with a huge list of tribute bands, a beer tent, and a packed lunch.  Even though the weather was rainy and chilly a good time was had by all!  We ended up back at Jimmy and Karen’s with their friends for a night cap.

The pace of the first three days was definitely getting to us!  Chris and I spent the next day exploring a bit of Prestwick and Ayr.  We went for a walk so that I could show him all of my old haunts...the high school had been completely rebuilt but I did remember where it was.  We picked up some black pudding and chips and headed down to the beach to eat our picnic.  Afterwards, we decided to head into Ayr on the bus.  The High Street definitely was showing signs of age and a poor economy with many of the shops clearly running into hard times.  On the way back we grabbed the number 2 bus and I asked for a fare into Prestwick.  Now the bus system is a little different in Scotland in that you pay for the distance you travel and not by the trip.  I guess I paid a fair to the shopping area of Prestwick but as we neared it I asked the driver if he would be going, “That way,” as I waved my hand someplace towards the right.  I knew that this would be the general direction of Karen and Jimmy’s place.  He muttered something that I took to mean, “Yeah, go sit back down.”  Many twists and turns later, I was becoming a bit apprehensive especially since the driver seemed to be scowling at us.  A fellow rider, an older woman, then asked me where we were going and I replied, “St. Cuthbert’s near the golf course.”  She assured me that we were still headed there but it was still a distance away.  The bus driver continued to scowl as I anxiously looked out the window for any familiar sites.  Finally, we passed the house and I announced, “There, that’s where we’re staying.”  We headed to the door as the bus stopped but the driver did not open the door immediately.  Instead, he glared at us and said, “Yer, no fram aound these parts, ar yeh?”
“No, we’re on holiday.”
“Well the next toime yes take the bus ask for...” and he said something incomprehensible and preceded to chastise us since we should have been paying a higher fee for the trip and apparently he could have been censured if one of the fare patrol people had been on the bus.  Boy, this was not a cheery bus driver!  I nodded dutifully, thanked the helpful woman and hopped off the bus with a great sense of accomplishment since we had made it back without the necessity of a long walk.
Mary, Karen’s mom and Emma and Neil were over for dinner.  Karen, and Jimmy, outdid themselves again with a fabulous meal.  I think I’m going to have to take back my invitation for them to come and visit us since Karen and Jimmy have set the bar just a little to high now...!  I think maybe the Brown’s have a new calling...they could definitely do well in the B and B department!

The next day Karen drove us down to Culzean Castle and Chris and I spent the afternoon walking around the grounds of the estate and taking a guided tour of the castle.  We even managed to have a bit of obligatory haggis at the tea shop.
Our last evening started innocently enough with my packing up and then watching a bit of telly.  We decided to have a good bye drink with Karen and Jimmy and the next thing we knew it was about three in the morning.  A quick two hours rest and we were up again and headed for Glasgow airport!  Needless to say, the trip home was a bit uncomfortable, especially with the half a dozen or so kids surrounding us, and the obnoxious woman in front who complained about everything, including the lack of fork to eat her pizza slice with.  We gritted our teeth and made it through the trip!  We didn’t really have much choice.
Karen and Jimmy, et al, definitely made the final leg of our journey the best part of our trip.  Karen cooked, cleaned, chauffeured and entertained us the whole time...she probably needed a well deserved rest after we left!  Jimmy was tireless in telling Karen exactly what to do to make our visit fantastic...seriously, despite having a broken leg, Jimmy kept up with trips to the pub, going to a concert, washing up, cooking and even hoovering! We can’t thank Karen, Jimmy and the rest of the family and friends in Scotland enough for all that they did for us!
Best line...
Emma after three days of cloud and drizzle, “I really think Scottish folk have unrealistic expectations of the weather...ye, live in Scotland, fer God’s sake, what de ye expect!”