Well, here I am, back at my favourite airport waiting for my flight to Phuket, Thailand. Things weren't quite as bad this time as it seems the security was much more interested in the bag belonging to the blonde, blue eyed five year old in front of me and completely disregarded the fact that I was hauling three bags with me as carry on; one of which was overweight and contained explicitly contraband items such as nail clippers and cough syrup.

Although I enjoyed my time in Bali, I am excited about going to a bit more of an upbeat location. I don't know what kind of chill pill they put in the water system in Bali, but those people are honestly the most laid back, placid group I have ever come across. They did get a little upbeat during the temple festivals with a lot of drum banging and cymbal clashing but day to day interactions were very low key. I don't think I heard anyone raise their voice and even without traffic lights and major congestion on the tiny roads, absolutely no road rage to be seen. Drivers calmly wait for others and wave bikes through as necessary.

Unlike everywhere else I visit, I never once felt like I was being taken advantage of, overcharged or ripped off. In fact, everything was so cheap and everyone was so accommodating that I felt like I was taking advantage of them. Everyone seemed almost apologetic when taking my money and accepted it for transactions as if I was doing them a great favour!


Since the services were so wonderful and cheap I decided to pay for a few outings that I wouldn't usually do. I was staying in central Bali and really wanted to check out the beaches to the south so I had Keili, the manager, call a tour company that advertised a trip that included ocean walking (they put a helmet with a hose attached to it to breath and drop you about 5 metres into the ocean to play with the fish, or sharks, or whatever else might decide to join you), a visit to Uluwato Temple, a couple of hours at Padang Padang Beach, then on to Jimbaran Beach for a sunset dinner. All of this for seventy five dollars. I was picked up in the morning by Wayan in a very sleek looking black car. It turned out Wayan was my personal driver for the day and the "tour" was just for me and I could do anything I wanted while Wayan saw to all my needs and wants! He was really put to good use when I very clutzily smashed my toe into a rock while at the beach. I knew I had done some pretty good damage when it started gushing blood over the white sandy beach and my stomach started to heave (I tend to get sick to my stomach when encountering huge pain). Instantly, visions of strange Asian bacteria entering my bloodstream and ending in amputation, entered my head. I decided to suck up the pain and walk into the nice salty Indian Ocean to cleanse the wound and then hobbled over to get a beer to settle my nerves. I made it back through the rock tunnel and up the cliffside to the parking area and Wayan quickly pulled out his handy first aid kit and preceded to do the first aidy thing with various ointments and salves designed, I'm sure, to fight off those nasty Asian bacterias. All in all a terrific day out! 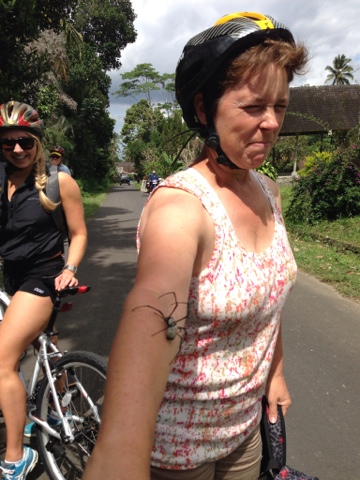 On another day I joined a cycling tour which began at the top of Mount Batu, an active volcano in Eastern Bali. We had a small group which drove mainly downhill through villages and paths. We made several stops along the way while our guide, Edi, explained some local customs and practices. He took us to the back of someones home where we could see the large mache animals that were being created. Edi explained that these would be used for cremation. When villagers die they are buried in the cemetery but every five years there is a village cremation where the dead are exhumed (but only the ones that are more then two years deceased because, according to Edi, the fresh ones would smell!) The exhumed bones are placed on this large paper mache animal which is attached to a paper temple, elaborately decorated. There is a mass parade of these bone transporters to a communal cremation area. Edi explained that since Bali still follows a caste system then this wouldn't be the practice for the Brahmin caste who would instead have private cremations. 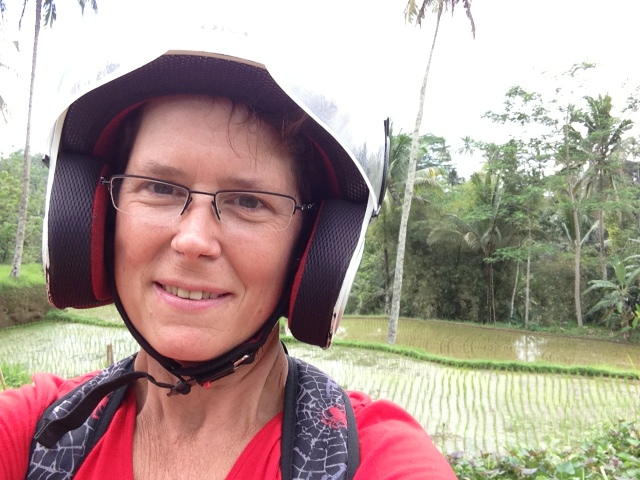 I also got to meet a bit of Balinese wildlife when Edi stopped to introduce us to some very huge spiders. He said that they were harmless so I let him put it on my arm but as it started scurrying towards my face all pretense of bravery was gone and I yelled in a very high pitched, unbrave voice, for him to get it off!

On one of my scooter outings I visited the famous Monkey Road in Bali. This is a temple sanctuary in the middle of Ubud which is overrun with the little beggars. Now, before this visit I used to think that monkeys were cute but these little beggars were downright vicious. I had bought some little bananas to feed the cute little monkeys but as soon as they noticed them they attacked...no table manners at all. When I hurriedly put them in my bag and zipped it up the nasty things tried to rob me...one of them actually bit me! Luckily, there are nice Balinese security people standing around with sticks to wave the more aggressive monkeys away. After he assured me that I was not going to die of some strange monkey rabies, I made sure I stayed next to the guy with the stick for the rest of my visit! I saw many monkeys toting around lipsticks, random sandals, and other illicitly gotten goods so these security people weren't always effective!  The temple itself was actually quite beautiful with some amazing sculptures!

Posted with Blogsy
Posted by Terry at 7:31 AM