There Are No Oompa Loompas in Kuala Lumpur!

In order to make it to Bali, I had to make a connecting flight in Kuala Lumpur. That name always makes me think of the Oompa Loompas in Charlie and the Chocolate factory since, when I first read this book as a child, I had thought this was where these fictitious characters actually lived. My layover was only about three hours so I didn't actually get to explore the city but the airport sure did dispel any fond thoughts I entertained about Kuala Lumpur. 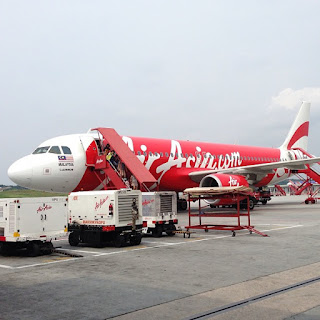 Now, I knew that this airport is the hub of air transportation for Asia but I really wasn't prepared for the sheer chaos. The frequent Asian travellers didn't seem to have any problems but this newbie was admittedly a bit overwhelmed!  We departed the aircraft after a friendly announcement by the pilot that our gate was the furthest from the building we were to enter and then proceeded, in a somewhat orderly fashion, to wind our way across the tarmac while dodging loading carts and other vehicles. At one point, I stopped to snap a picture of one of the planes, and was nearly run over! After being loudly chastised by an airport person waving flags I made sure to stay with the group for the rest of the endless hike. Following the crowd I landed up in a huge immigration area. Since I was only on a layover, with the same airline, I didn't think I should need to go through the whole immigration thingy so I tried to ask an official looking person if I was meant to be somewhere else. He waved me back down the flight of stairs I had just come up. I joined another queue and when I finally got to the front the woman told me that I had enough time between flights so I would need to go back upstairs, go through immigration, check back in and find my way to the departing gate. Ok, back up to immigration.

I joined the very long line and finally was given my temporary Malaysian Visa...good to know I could now stay here for thirty days if I so desired! I continued to follow the crowd and made my way to a large open area filled with people. I spotted a sign for International departures and thought that would be a likely place to check back in for my next Air Asia flight. As I joined a line to have my bags scanned a kindly Australian I had met on the plane asked if I had printed my boarding pass because if I didn't I would face an additional charge - gotta love budget airlines. He pointed me in the right direction and by managing to put on my gormless tourist face I got a friendly young security person to quickly print my pass. Back to the security check. It wasn't much of a security check in my opinion since I only put my carry on suitcase through and no one questioned my backpack slung over my shoulder. As I scanned this new area it seemed to be just a baggage drop off and since I planned on just carry on I didn't think this was the right place for me. Another, rather abrupt security person waved my off in another direction so I carried on back the way I came.

Spotting a sign for Gates I approached the queues and joined the one where the fellow was testing weight just by lifting the bag rather than putting it on a scale. As he lifted mine he muttered, "Heavy," and proceeded to tell his colleague to weigh my bag. They told me 10.5 kg was too heavy and they weren't listening to my logical argument that I had just come off of an Air Asia flight with the same bag as my carry on. He must have felt a little sorry for me as at this point I was looking a bit sweaty and disheveled. He indicated that maybe I could take some things out and put them in my backpack. I moved to the side, opened the case and started stuffing whatever I could into my backpack. Three tries later, with pullovers tied around my waist, my Air Transat comfy blanket and neck rest swinging from my bulging knapsack and my Tilley hat threatening to strangle me as it hung around my neck, and I was through!

Joined another security check (honestly, how many of these things do you need) where they once again only scanned my small suitcase. Finally, I was on the other side and took a moment to try to hastily repack my luggage. Making my way through the hordes of people in this terminal proved to be a huge challenge in itself. There were people everywhere. They were sitting on benches, standing against walls, sitting on luggage and a never ending stream of conversations was filling the place in every language imaginable.


Now, I had been travelling all day on an empty stomach and was getting pretty hungry so my next mission was to find something to eat. My stomach was grumbling as I passed many reasonably priced kiosks but each one I approached took cash only and most of these only took Malaysian cash. I spied a money exchange and was very rudely and abruptly told I could not buy ten Malaysian dollars with my Chinese Yuan. I was getting desperate as I passed a Dunkin' Donuts with a sign saying it took American Dollars. I had tucked forty American in my wallet just for gastronomic emergencies such as this so a few minutes later, and fifteen dollars worth of change in Malaysian money, I was happily devouring a delicious double egg croissant, an iced coffee and a donut!

Back down to my departure gate where I too leaned against a pillar to prepare myself for the long trek across the tarmac to board. Despite numerous "security checks" not once did anyone scan or look into my knapsack!

So I now have a lovely Malaysian Visa stamp in my passport and thirty two Malaysian Ringgat (money) to commemorate my stay in the Kuala Lumpur airport. Unfortunately, I didn't see even one Oompa Loompa! Posted with Blogsy
Posted by Terry at 4:54 AM