A Taste of Koh Phi Phi Koh Phi Phi is one of the many famous islands in Thailand that is renowned for beautiful views, beach parties and diving. It is situated between Phuket Island and the Andaman Sea It was hit very hard by the Tsunami of 2004 but it has rebuilt and there are still many signs of recovery. The island is a serious hotspot for backpackers and I must admit, I don't think I've ever seen more twenty something year olds all congregated in a single spot in my life! There are no cars on the beach but you definitely have to watch out for the endless stream of bicycles and carts as they make their way through the paths of Tonsai village.
As you arrive at the pier you enter Tonsai village which is the centre of the island consisting of numerous hotels, hostels, bars, restaurants and dive shops. The island has two bays around which Tonsai is located, Ton Sai Bay and Loh Dalum Bay. I quickly grabbed a map and began wondering the paths looking for my hostel. I was a bit nervous when one helpful Aussie in a dive shop asked me where I was staying so he could direct me, and when I told him Dee Dee's Beach house he cheerily said that this was the party side of the island! Considering the whole village is a bit of a party place, I was hoping I hadn't made a mistake in booking the accommodations. After a few wrong turns and trekking along the beach, which was absolutely wonderful, I was pleasantly greeted by a nice little hostel situated right on the water with a simple but clean and secure room nestled amongst a beautiful gardens. 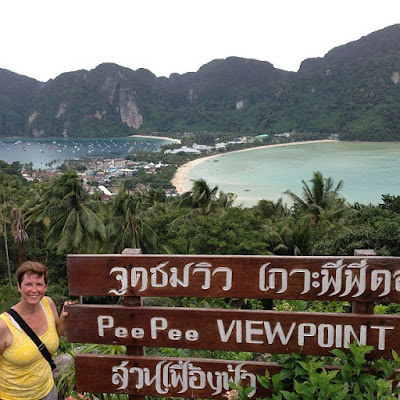 I spent my first afternoon wondering around the town and climbing to the highest point on the island called The Viewpoint. A beautiful view of the two bays rewards you at the top.
The island has an endless number of wonderful little Thai, Indian, or even Western style restaurants to choose from for eating. I ate mainly at some smaller Thai places and sampled some delicious delicacies such as Thai pancakes, a potato pancake thingy, wonderful green curry, fried bananas, and delicious fruit smoothies. Yum. Eating is fairly inexpensive unless you go for the more western type of foods. Most of my meals were around one hundred to two hundred Baht or three to six dollars. In the evening I ventured out to the beach outside my hostel and sampled a bit of Phi Phi's nightlife. Both beaches offer a variety of bars and endless fireshows. The standard drink is either Bantang beer or a bucket offered with a variety of alcohol in bottles slightly less than a mickey and mix ranging in price from about 150 to 350 Baht ($5 - $10). I grabbed a bucket of Thai Whiskey and settled down on a beach chair to enjoy the show. Fire dancers entertain at just about every bar along a 200 metre stretch of beach and although the place was crowded with the endless stream of twenty somethings there were some families and people of my advanced years enjoying the shows. As the evening wears on, and the drinks flow, the audience becomes part of the performance by joining in as a rope set on fire is brought out for skipping and a bar of fire is used for the more daring to shimmy under. I hung out with two young girls from France who tried to convince me to join in but being somewhat adverse to fire I instead agreed to try out the bucking bronco which I figured would only result in broken bones rather than burned hair!

I finished my bucket and headed down the beach towards my little hut at the end of the island and was pleasantly surprised that I could hardly hear the beach parties at all!
I had booked an all day snorkelling trip but awoke to the disappointing sound of rain pelting down. I had origionally planned on splurging for this part of my trip by joining a cruise tantalizingly called "Bob's Booze Cruise" run by a Canadian fellow but alas the Phi Phi longboat association had banned the larger ships during the low season so I was forced to go with either a speedboat or a cheaper longtail. I had booked a longtail but it was cancelled that morning so I headed back to my room for a little snooze. When I woke up the rain had stopped so I threw my stuff into a bag and headed down to the pier where I managed to sign on to another boat that was ready to head out. Just as we were about to board the heavens opened up once again and the rain came down in torrents. We would-be snorkelers huddled under a half built dwelling, which had a very large hole in the roof, and tried unsuccessfully to stay somewhat dry. The organizers of this little outing obviously weren't keen on refunding our 400 Baht apiece and waited for a slight break in the downpour to herd us onto the longtail where we sat huddled trying, unsuccessfully, to keep our pitiful belongings dry. As the thunder roared and the waves built I briefly wondered if my goal of snorkelling on the beaches of Maya Bay were really worth what seemed to be a very good chance of drowning but before I could make up my mind the boat was pulling out and we were on our way. We were all very cheerful at first but as the boat crested several ominous waves and the rain continued to pour, some of my fellow travellers were looking a bit concerned. The boat made its way out into open water and one by one the occupants of the craft began to reach for life jackets. As the boat driver poured water onto the engine, as if the torrential downpour wasn't enough to keep it going, I tried to judge how far I would need to swim to reach land and concluding that it might be beyond my limited swimming abilities, I also donned a life jacket. We finally made it to an inlet and the weather seemed to let up. The anchor was put down and I had my chance to snorkel. Several of my fellow passengers seemed a bit traumatized and didn't bother to get off the boat but they certainly missed an amazing experience. The water was beautifully warm and filled with every colourful fish imaginable. We held onto crackers, our lunch, under the water and the fish would dash forward to nibble them from our hands. I was not thrilled to get back into the longtail but we were still meant to head to Maya Bay which had become a highlight stop for tourists since the release of the movie The Beach starring Leonardo DiCaprio. In the movie Leo eschews modern civilization and joins a ragtag group of others of like mindedness on a remote, uninhabited Thai island. The method by which we had to get to the beach was actually reminiscent of the movie as we were forced to abandon the longboat in the middle of a bay, swim to a rock filled cliff area which had been rigged with a rope ladder thing. After swimming the waves began crashing the would be adventurers dangerously against the rocks as we tried desperately to grab onto the ropes and haul ourselves out. Several young women were actually dragged onto the ropes by helpful Thai guides and as we ascended to the top, I noticed several people nursing bloodied knees and toes. I was very proud that I had made the journey independently with just a minor stubbed toe! We trekked through the jungle and after about ten minutes were rewarded with an hour on one of the world's most beautiful beaches! Posted with Blogsy
Posted by Terry at 12:40 PM