This is Not the Hilton 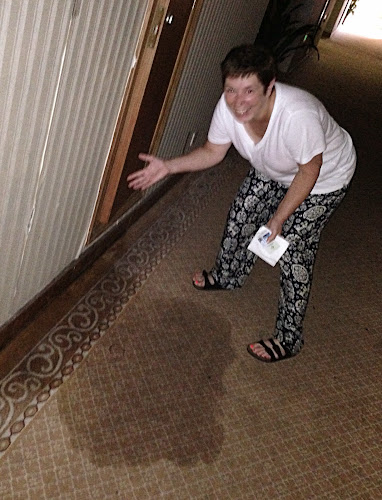 Despite becoming culturally immersed in the nightlife of Nanjing until the wee hours, my teaching partner for the next two weeks, and I, were quite proud of our upbeat and chipper attitude as we made our way to our new accommodations the next morning. Actually, we were probably not at our best but we did try to be cheery and engage our host in some witty repertoire about how China compares with Canada but alas, we must have been pretty boring since Millie spent most of the one hour car ride to Dantu quietly snoring in the back seat.
Now, when I am travelling I am not really a Diva about my accommodations and, probably due to my thrifty, some might even say "cheap", attitude, I have stayed in some very unusual and even sketchy places. Most of these I have booked myself and if they turn out to be uninhabitable (large bugs, malodorous aroma, loud and/or ominous noises of unknown origins) then I can simply refuse to stay there and find other digs. I recall booking a room in Myrtle Beach before the days of the internet and TripAdvisor and entering a "3 star" accommodation with cobwebs, live loose electrical wiring, the sound of what was probably an enormous family of rats and very large cockroaches (I might be exaggerating but my memory recalls something in the range of three inches). After taking one step through the door, following as the agent unchained the metal grate over it, I turned around, walked out and headed to the reception to find something in the "5 star" range.
For our stay in Jiangsu our accommodations are arranged by the hosting district - a district being loosely synonymous with municipality. We are told that we will be staying in a "Chinese" 3 star hotel which means that there will be a bed, an ensuite toilet and shower/bath, and air conditioning. I suppose our new home met these basic requirements and indeed, from the outside and the lobby area, appeared to be quite luxurious by Asian standards but as we alit from the elevator onto the third floor Andrea and I exchanged a look that said, "Uh oh..."
The smell of urine and stale cigarettes was the first thing to hit us, nay overwhelm us, and we unconsciously took a step back into the elevator rather than forward. The hall ahead was dark and dingy with only two or three flickering working light bulbs, probably to prevent us from seeing the torn wallpaper piteously stuck back up with packing tape or the large stains on the carpeting which may have been caused by someone relieving themselves. We have seen small children squatting, wherever they stand, when nature calls; in fact, clothing for infants and toddlers is designed conveniently split in the appropriate area to facilitate the practice.
The actual room is large with a small refrigerator, kettle, and two single beds. The beds in China are very firm but these beds are so hard that I did pull the sheet up to see if I was sleeping on a mattress or a four by eight piece of plywood. The carpeting is covered in stains and cigarette burns since it is common practice to drop hot butts, even on carpeting, and grinding them with your feet to put them out. The headboards have large black stains and the wallpaper is torn and taped, but not well enough to hide the mildew growing beneath. The hot water is somewhat sketchy so my morning fun is predicting whether I will have steaming hot water, in which case I will spend a luxurious amount of time lathering and washing my hair, or if the water is tepid at best my ablutions consist of a quick wash of the vital bits! There is air conditioning but even after turning it off, it seems to continue to blast so here I sit, typing this missive while wearing long pants, socks, and a hoody even though it is about 33 Celsius when I step out into the hallway. I have company in my room, in the form of hundreds of little mosquitos but I am trying to get rid of the infestation with this handy little device I have only seen in China which plugs into an outlet and emits some particularly noxious substance rendering the little b#$%#^#s dead and hopefully not causing the human in the room any irreversible unknown health effects!
I do have a kettle, green tea, and four very nice silk comforters (two are being used to soften the mattress and two to protect me from the cold) so there are some positives. One must look on the bright side of life after all!
I also don't want to give the impression that this is typical of accommodation in China. Both Andrea and I have stayed at very wonderful chain hotels and B and B type places throughout China which have been immaculate and very comfortable. This just doesn't happen to be one of them!

Posted with Blogsy
Posted by Terry at 8:04 AM