The other day the fellow driving us to school in Gaoyou stated, "I think it is much harder to drive in China (then Canada, I presume) because there are many rules."

I choked on the mint I had been sucking as I attempted to hold back a somewhat loud laugh at this ludicrous statement. Since I am sure that Charles (the english name he had taken for my benefit) had never actually visited Canada, or any other Western country I am not sure what knowledge he was basing this statement on. He probably had acquired his impressions about western driving habits from various Jackie Chan movies and other
action flicks in which drivers seem to careen through the streets of large cities with reckless abandon while hapless pedestrians dive for safety. If this was indeed the basis of his observation then I can forgive him for thinking that driving in China is unduly rule driven. 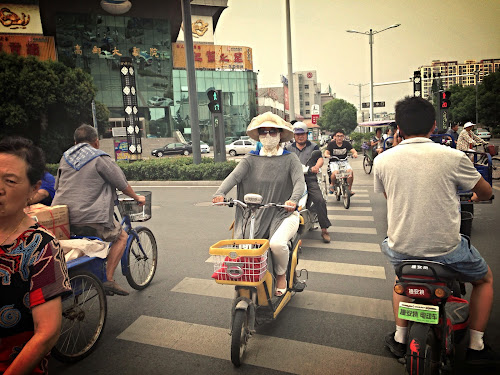 In fact, in my experiences, being an observant passenger here in China, there really aren't any rules besides being sure to use your horn with much enthusiasm! At first I thought the constant honking was meaningless but in fact it does have some sort of purpose. Basically, if you are about to pass someone or something, a car, people on a moped, an ebike, a rickshaw, a stray dog, whatever then you honk as you are doing so. This may have been a sensible system when there were fewer cars on the road but a small size city such as Gaoyou does have enough vehicles to make the resulting cacophony of noise somewhat overstimulating to say the least. 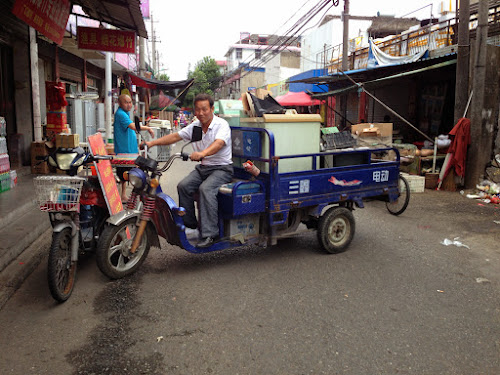 The other thing I've noticed is that although there are designated lanes they don't really seem to mean anything as cars stradle the dividing lines with no clear indication of where exactly they mean to be. And don't even get me started on roundabouts! Basically, all vehicles with wheels and pedestrians just sort of dodge and weave as they navigate the circle with no real order or sense...but definitely a lot of honking. When making a left hand turn drivers seem to purposely swing their vehicle to the center and turn, cutting into the inside lane without actually looking but with the handy horn blaring away. I've closed my eyes and hoped for the best with many left turns in which the driver turns into the oncoming lane and then slowly moves over to the correct flow of traffic. I really don't think I have much to worry about though because I'm pretty sure I could run alongside most of the cars I've been in and beat them to the destination. I asked one of our drivers, who was toddling along at about 20 km/hr what the speed limit was in the city and she casually replied that it was 60!
Many of the cities do have separate very large lanes for bikes, ebikes, mopeds and rickshaws which are separated by a median so I suppose this helps reduce fatalities. A good thing since the moped or electric bike seems to be the main family vehicle with rider, child, infant and often the family pet all happily traversing the city streets. 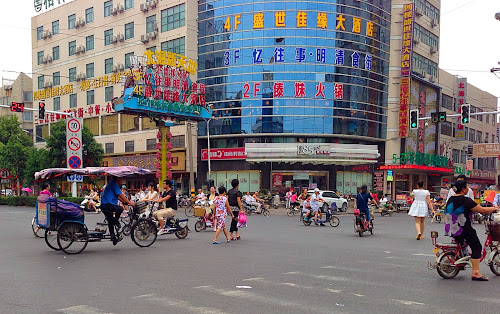 And there are traffic lights at many intersections but in quite a few of the places I have visited they really just seem to be a form of decoration being widely ignored. Many times, I have stood at a corner dutifully waiting for the green crossing signal as those around me just walk into the traffic and miraculously make it to the other side unscathed. A colleague advised that the best way to cross the street in China is to do so with purpose, at a steady stride and never break your pace or path. Sure enough, when I have tried this it is almost like I have an invisible force field around me as bikes, cars and rickshaws seem to flow past me but never actually strike me down!

Posted with Blogsy
Posted by Terry at 4:00 AM