Doing the John Wayne Thing or Horseback Riding in the Andes

Lucy, the owner of Janaxpacha Hostel had told me that we could do some amazing things in Ollantaytambo so I decided we should try a few. You can pay to see the ruins (you actually need to buy a Boleto Turistico Ticket for several sites which costs 70-140 Soles) or take a free hike up another side of the mountains which did look interesting. She also recommended a horse ride to the Pumamarca Ruins that she said was  pretty easy for the non equestrian types. Ok, maybe being American she is used to this sort of thing but for those of us that are only familiar with pony's at a fair this was a bit scary!

On our one day free in Ollantaytambo we decided to go with the Horseback Ride thingy because it sounded intriguing and would make us feel like real out-doorsey kind of people.  Carlos and Lucy packed us a picnic lunch to go and a very lovely young lady met us at some ridiculously early hour (honestly, I think these people get up in the middle of the night to start these things). When Lucy asked if any of us spoke Spanish I started to become a bit nervous about this whole undertaking but we carried on and followed the lady down a few streets. We soon saw five horses, all saddled up, being worked on by a fellow with a cast on his leg, seeming to organize things. A couple of kids and another woman were all helping out but none of them seemed to speak any English. Using hand signals, they directed us to our various steeds and I know that, I for one, made a rather unflattering spectacle as I kind of threw myself onto the horse and wiggled around until I felt like I was in the correct position. I admit that I was a bit nervous by the lack of riding helmets and then the sudden appearance of some other fellow who quickly exchanged a few words with the owner/operator who seemed to have very recently suffered his leg injury (probably riding horses along very dangerous Incan trails!) I'm pretty sure our substitute guide was a bit reluctant about the whole adventure and really didn't look too impressed with this crew of non Spanish speaking, horse nervous Canadians! As we traversed along the very remote trail into the mountains he actually had to ask directions from some scythe carrying Andean farmer, heading effortlessly up his terraces.

Since the horses were a quite a bit smaller than any horse I've been on in the past (all three times) I wasn't as frightened at first, but the stirrup thingys were more of a cage than the ones I've been used to, where your foot goes right through, so I didn't really feel fully in control. I know I didn't have a chance of controlling this beast, though, and put my total trust in my new caballo friend. We were kind of lulled into thinking this whole trip wouldn't be too bad as we travelled alongside the Urumbata Valley. Unfortunately, apparently the Incans, in their infinite wisdom, had opted to build all their little cities not along the sensible valley floors but way up in the most remote, ridiculous peaky parts of the surrounding mountains!

Our guide suddenly headed off the main trail and before we could object we were headed straight up the mountain along a very frightening narrow rocky trail with a shear drop to the right. I decided to just keep looking ahead, lean forward, and hold on as tightly as possible, as my horse delicately made his way up some very steep inclines. Unfortunately, one member of our party became a bit panicked and jumped off the horse, much to the alarm of the horse and the guide. After a few expletives this participant decided that since heading back wasn't an option, she would walk the hazardous parts of the trail rather than trust the instincts of her trusty mount.

Our horses pretty much ignored our poor riding skills and lumbered on towards their destination. Mine for one, seemed completely oblivious to the fact that I was sitting on top of him as he trumped through foliage and brush which mercilessly whacked my face and left large gashes along my arms. I stoically ignored all pain and pretty much just held on for dear life and finally, with blood running down my arms and scratches on my forehead, we reached our destination!

The fun wasn't over as we had a gruelling hike (at least for Shelby and I) to the top of the mountain, where we would eat our lunch and admire the various structures of the ruins themselves. The view was spectacular and having the entire place completely to ourselves was great (this journey wasn't for the feint of heart so I'm not surprised we only encountered natives along our way) but I was definitely beginning to have some serious doubts about my ability to trek to Machu Picchu!

We did eventually make it back to our little hostel all in one piece and decided to treat ourselves to a wonderful massage and dinner in the square that evening.

Apparently, the wounds on my arms weren't going to be my only injuries of the day. Ever hear of saddle soars? Neither had I until I took a look at my butt and saw two raw sores that looked pretty much like hamburger meat! The joys of trying new things... 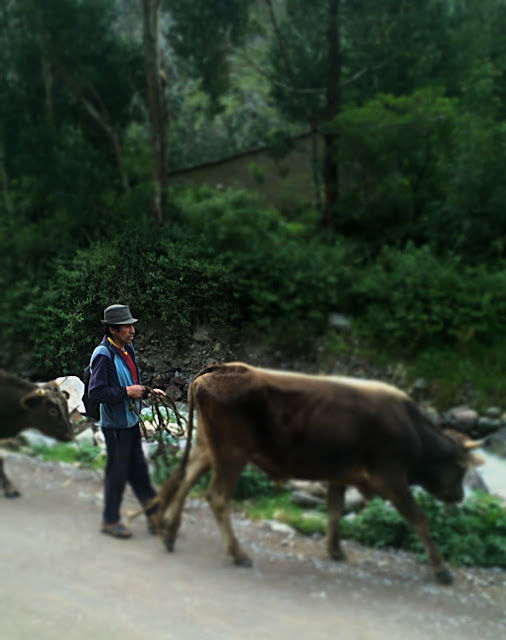 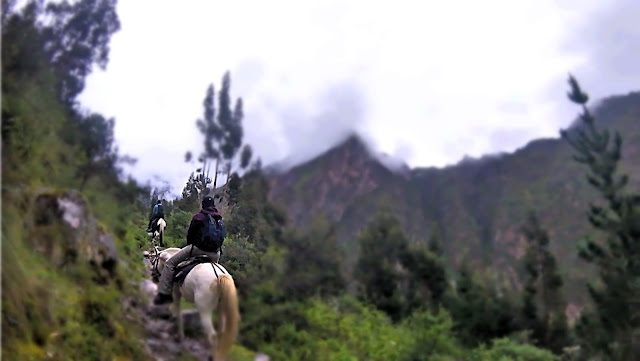 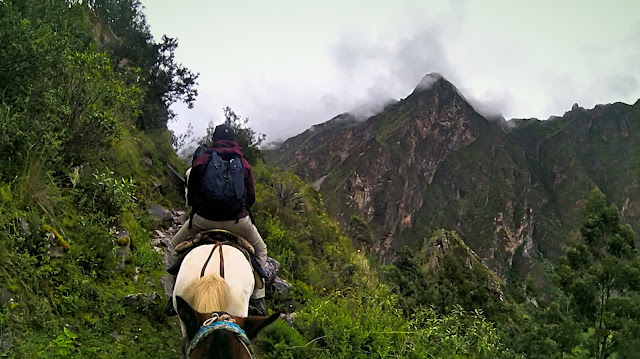 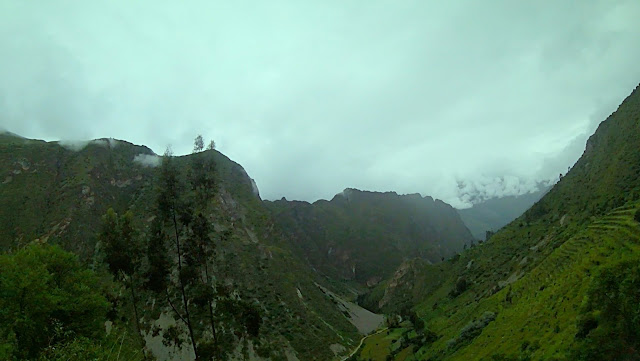 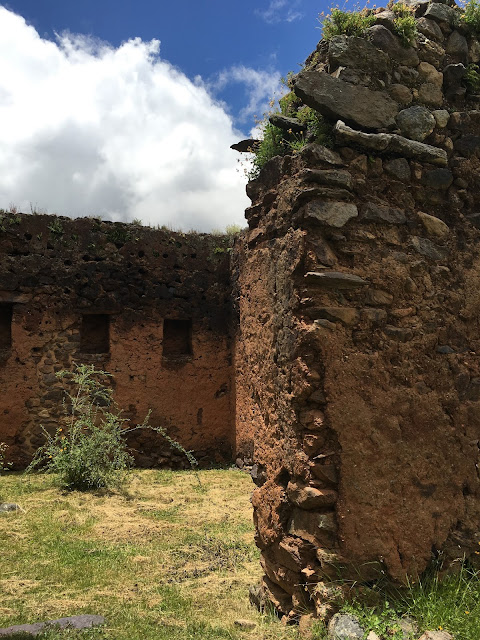 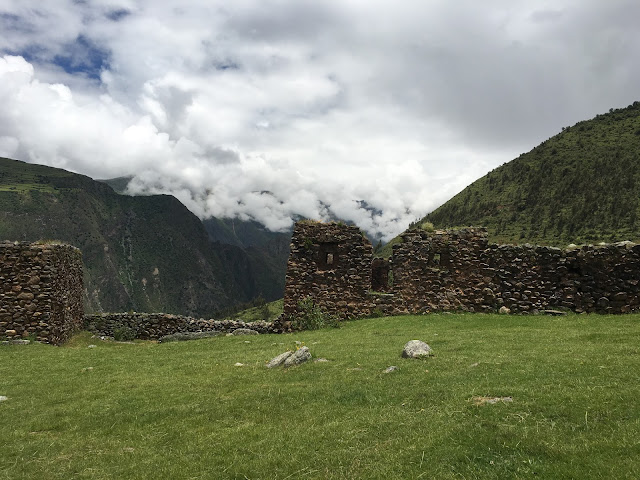 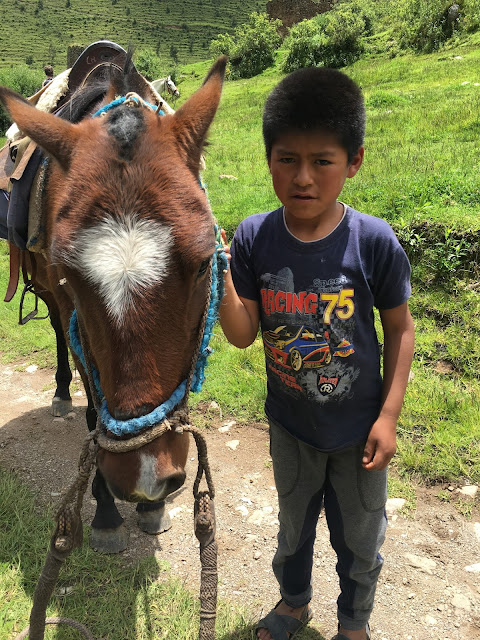 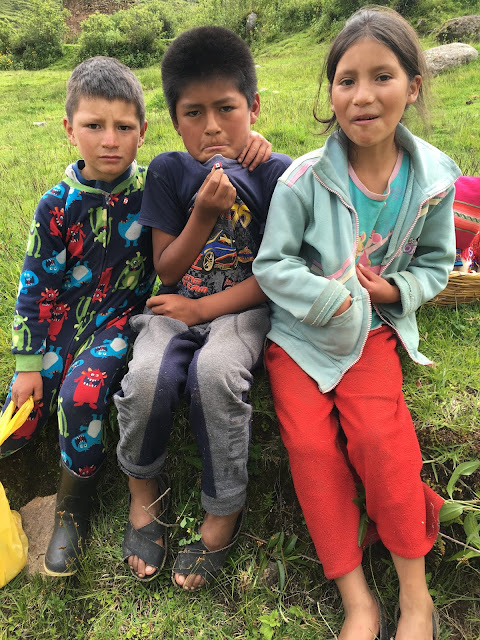 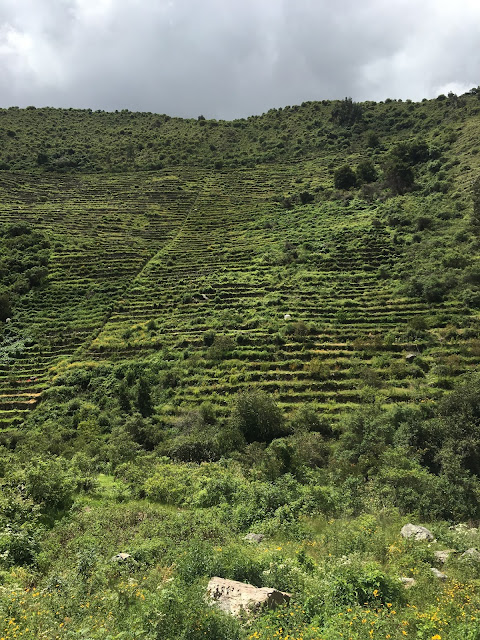 Bottom Line: $40 US per person with lunch booked with Janaxpacha Hostel

Highlights: the gorgeous views and having the Pumamarca Ruins all to ourselves; chatting to some local kids

Downers: being scared silly riding horses on very narrow trails with a sheer drop and the final hike up the mountain to the ruins.

So, are you ready to visit Peru? Let me know in the comments.
Posted by Terry at 1:18 AM