How to Get From Hamilton to Pearson in Four Easy Steps 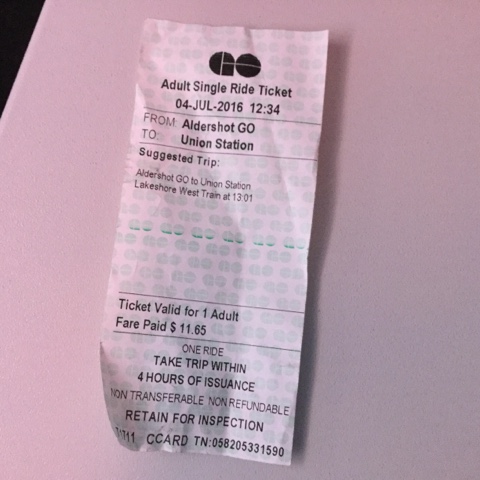 It's been a couple of years since I attempted the trek to Toronto Pearson from Hamilton using public transport so I decided to give it another go. I've broken it down in a few easy steps.

I keep waiting for that fabled day when the Go is running regular trains out of Hamilton to Union Station but that day hasn't arrived so alas, to get to Toronto by train you will need to make your way to Aldershot. Depending on your method of getting to the little hamlet this will take anywhere from fifteen or twenty minutes to an hour.

Option 1 - Taxi or an Uber (approximately $10 - $30 depending on where you live)
Option 2 - Get the Go bus from Hunter Street after taking city bus (city bus $2.25 and additional cost of Go bus approximately $5)
Option 3 - Convince your brother to drive you on his lunch hour ($0 and this could be any relative or friend if you don't have a brother!)

I have only taken the Go train once or twice and although clean and convenient, it seemed painstakingly slow. We stopped at every station along the way and seemed to only make it to a cruising speed which would rival a speedy sloth...ok, maybe I'm exaggerating, but is did take over an hour to get to Union.

I love the way Torontonians effortlessly glide through the maze of buildings and walkways after leaving the Go train whereas I look like some hick from the country dragging my suitcase along with a confused look on my face. Luckily, I managed to find a helpful info girl (girl really, as she didn't look much more than 18). She smiled at me pityingly, as I asked for directions. She told me to keep walking and to follow the UP signs to the skyway. I did take a little detour on the Young Subway line to meet my daughter for a quick lunch but I didn't dally as I still wasn't sure about the whole Airport Express thing. After locating and following a few UP signs, it occurred to me that this stood for Union Pearson (honestly, sometimes I'm not very clever). After about a ten minute walk I made it to the departure where I quickly purchased a ticket for $12 and joined a queue for the train. It departs every 15 minutes and is a very clean, comfortable spacious ride. After two short stops and 25 minutes we arrive at Terminal 1.

The UP only goes to Terminal 1 but there is a complimentary LINK train which seems to run every couple of minutes. After exiting the UP take a very short walk down the corridor and you will see signs for the LINK which runs on two tracks. The actual ride to Terminal 3 is about three minutes.

So to sum up, the whole trip takes anywhere from two to two and a half hours, costs anywhere from $22.65 - about $45, and can be an enjoyable afternoon!  Not to mention avoiding the whole 403 and 401 parking lot scenario that you would need to endure if you drive!
Posted by Terry at 8:36 AM

Email ThisBlogThis!Share to TwitterShare to FacebookShare to Pinterest
Labels: Pearson International Airport, taking the train from Hamilton to Pearson